Ok stop the recorded message because this sounds pretty great right? This new service sounds great in theory but this is assuming that the agency has the right influencers signing up and great advertisers as well. In order to test out Vity (and take a peek under the hood) I signed up and synced my (albeit tiny) social profiles to the platform.

First step is to sync at least one social profile to the Vity platform. From there it will ask you to complete your profile, uploading an image, describing yourself and listing your interests. It also allows you to set your rates per post which I’m assuming advertisers can filter through based on price and following. 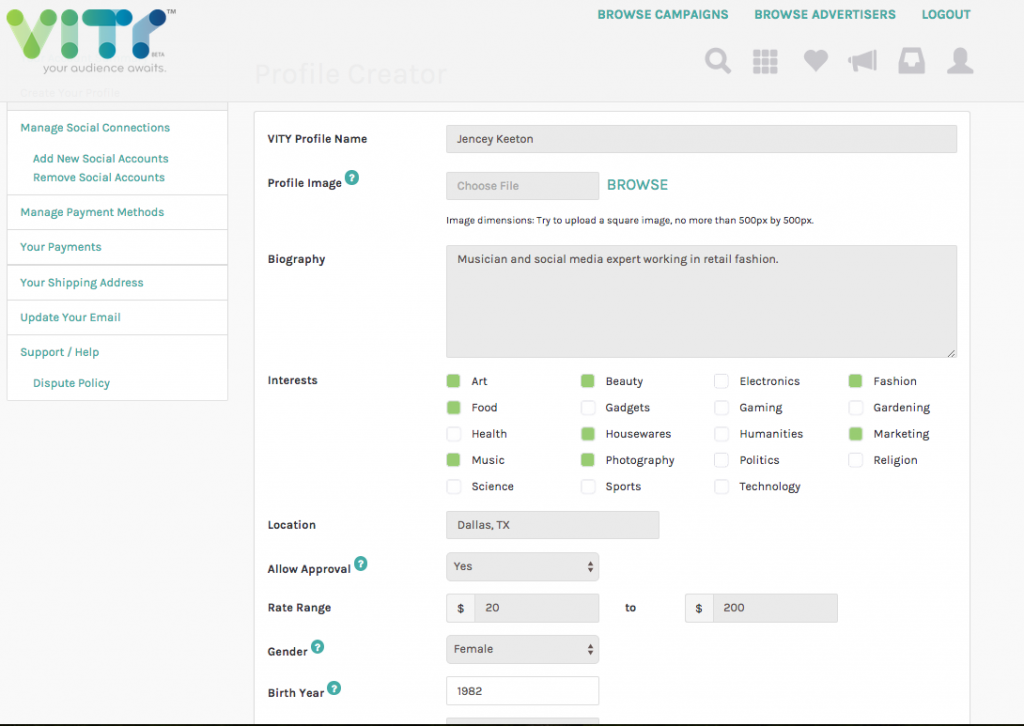 After my account was set up it prompted me to connect my other social profiles. Note that they completely ignore Facebook which leads me to wonder if that channel is now the dinosaur of social. 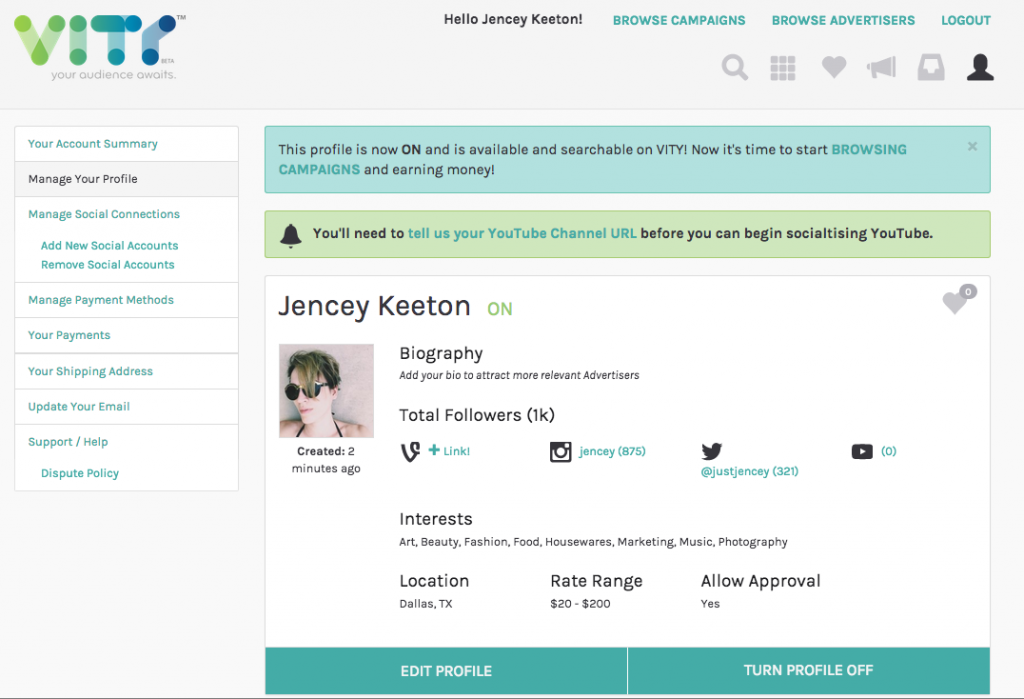 Step 2: Check Out the Available Campaigns

Ok great I signed my profiles up and it’s time to make some money! Wrong. Most of the advertisers required at least 10k followers which I feel is pretty steep for a platform that’s trying to actively recruit influencers. VITY may want to consider there are influencers within certain markets (like me!) that don’t have mass reach but can affect opinions locally. One very interesting campaign was for a model who is looking for #MCM posts to help his grow himself as a brand. 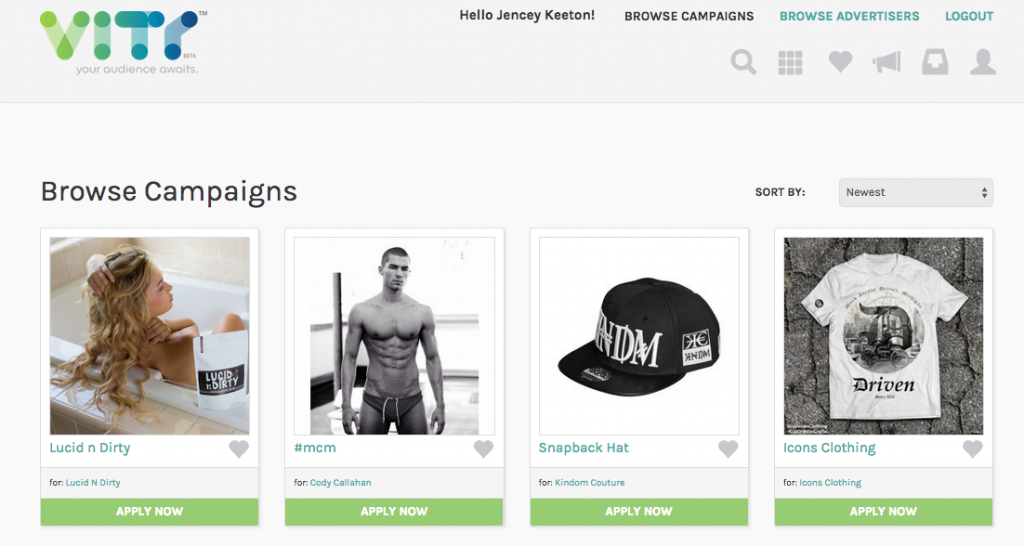 Step 3: Check Out the Advertisers

Once again, looks like VITY is ramping up their advertiser base. These companies all appeared a little bit smaller which leads me to further stress the importance is smaller influencers with strong base within certain locations. If VITY takes that route they could corner the market on local influencers. 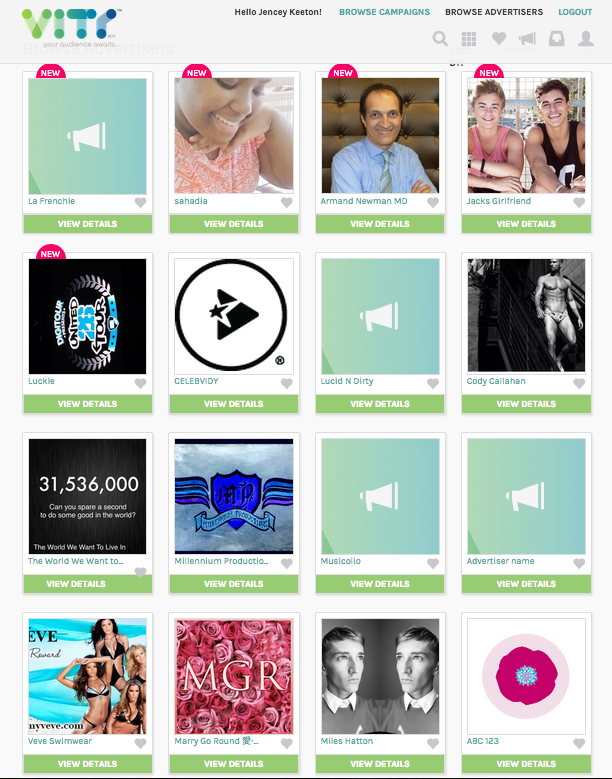 Overall, I think this platform has a really clean UI and has massive potential if the right people take hold. We’ll be watching them over the next year to see their progress!

“It has been an amazing journey working with my combined team at Mineral® and Mithra62 in conjunction with the partners to develop VITY. We have successfully constructed and developed an innovative and captivating solution that will provide direct tools for Influencers to finally connect directly with Advertisers,” says Lynne Haaland, VITY co-­‐founder.

“We want VITY to be an essential tool in reaching their target markets through social media. Ultimately, this helps influencers monetize their time and effort in building a following and consumers to get more authentic, relevant and organic advertising,” adds Mark Abdou, VITY co-­‐ founder / co-­‐CEO.

On its launch day, VITY will host an exclusive event, The VITY Concert Experience, partnering with Meerkat to live stream globally, the performances by TYGA, KID INK, JACK & JACK, and other surprise guests at a to-­‐be-­‐disclosed location in Hollywood, California. The red carpet event will include celebrity and VIP attendees consisting of social media influencers and advertisers who will be able to network and learn more about VITY. Demos will be provided through the duration of the evening to ensure all guests comprehend and understand the platform. VITY is also inviting California residents to participate in a sweepstakes for the chance to win a pair of tickets to the exclusive concert, valued at $100 each. Additionally, VITY will also be selling exclusive tickets at vity.co, to the VIP Event, immediately following.

“This launch party will ignite a marketplace for the world of social media advertising in a brand new way by bringing influencers and advertisers together through VITY. We are pioneering and leading this space through a platform unlike any other,” says Jacob Peterson, VITY co-­‐founder.

A select number of ticket sales from the concert will benefit Dan Fleyshman’s Model Citizen Fund, a non-­‐profit organization that distributes life-­‐sustaining backpacks filled with 150 items that include food, health, and survival essentials to the homeless and disaster victims, giving them the tools and confidence to build/rebuild their lives.

WATERSIDE  / MINI-MAGAZINE ART DIRECTION, INFLUENCER CASTING AND STRATEGY TO LAUNCH THE AWARENESS CAMPAIGN FOR WATERSIDE WE PARTNERED WITH TWO INFLUENCERS TO DOCUMENT THEIR DAY VISITING THE…